The copper-cobalt plant diversity and assemblages needs to be conserved to avoid species extinction risk and losing the genetic heritage it represents. Due to dynamic of the mining process, a variety of habitat co-exist during mining operations:

In-situ and ex-situ conservation strategies can be combined, involving preservation of intact sites, designation of micro-reserves, ecosystem reconstruction, endemics translocations, topsoil management, nursery and seed collections. Optimal conditions for species multiplication are tested in order to allow for active conservation. The use of copper-cobalt flora in post-mining restoration programs is also promoted.

The objective of off-site conservation areas is to ensure the persistence of copper-cobalt flora in the Katanga region. They should represent the communities that will be impacted by the project.
Two strategies that can be implemented to preserve the complexity of ecosystems developing on copper-rich substrates include:

Sites with the presence of high concentrations of Cu-Co in the soil in sufficient amounts for the development of a typical copper-cobalt vegetation clearing, but with a low mineralization value to be considered as a low priority for exploration or exploitation target within the intermediate to long-term (i.e., 10-20+ years), can be managed during this timeframe for conservation purposes. 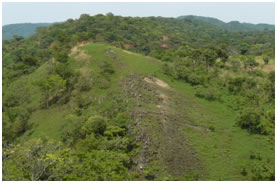 One example of intact hill where extraction is temporarily avoided. In total, 8ha are dedicated to in situ conservation.

These habitat remnants are temporarily designated when a mineral exploitation scheme of a site does not disturb all of the habitat area.
These two types of sites may serve as reserves for protection of population of rare plant species and/or for translocation from other areas impacted by mining activities and/or for reintroduction of threatened plant species.

A seed bank program can be developed for the long-term conservation of copper endemics threatened by mining activities in Katanga and species potentially useful for post-mining restoration programs (nurse species, structuring species).

The ex-situ seed bank program includes field collection of seeds, storage of seeds at institutions with adequate facilities, tests of seed viability and tests of seed conservation over time. A program like this has been developed in collaboration with the University of Lubumbashi (UNILU) & the National Botanical Garden of Belgium (BR).

Seeds should be collected from priority copper hills based on planned mining sequence. Seed collection should follow the recommendations from ENSCONET (European Native Seed Conservation Network) and the Millennium Seed Bank Project. 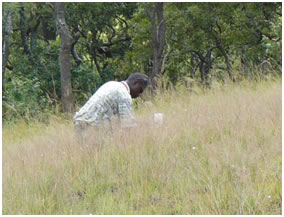 The role of a plant nursery is central in a rare species conservation program. It will allow an operator to maintain and multiply species of concern populations impacted by land disturbance activities. New individual plant specimens are produced for later translocation to in-situ protected areas, a botanical garden or a restoration site. A nursery is useful to monitor the life cycle of species of concern and to further expand our scientific knowledge regarding their ecological requirements and ideal cultivation techniques. The objective of these efforts is to develop a scientific based program for the multiplication of copper-cobalt species of concern.

Conservation parcels (botanical gardens) are a place for permanent conservation of a number of individual specimens of target species. The goal should be to create a reference genetic collection of copper-cobalt species. These populations should be self-sufficient or will be replenished regularly from an ex-situ seed bank or a nursery. Conservation parcels may also be used for public demonstration and education on biodiversity conservation.
In this example, a botanical garden was developed in a cooperation program between Belgian universities (ULB, GxABT-ULg) and the University of Lubumbashi. Species habitat was reproduced in the parcels with topsoil from copper hill parcels corresponding to their different ecological requirements. 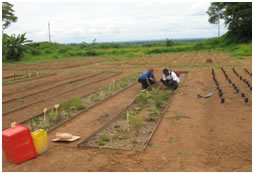 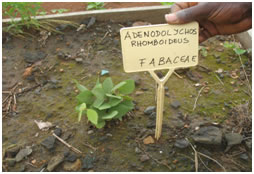 Botanical garden at the University of Lubumbashi

Ecosystem reconstruction is the translocation of whole plant communities from a site to a host site where favorable environmental conditions have been created. This conservation technique aims to reconstruct artificial ecosystems for the preservation of plant community diversity, species of concern and the plant species richness of the site to be mined. This approach presents an opportunity for an organization to partially compensate for some of the negative impacts attributable to extractive activities and minimizes the risk of species loss.

The following steps should be achieved prior to land disturbance:

A scientific study carried out on plant communities to identify different soil types. For example, see images below: 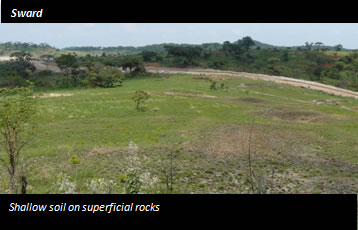 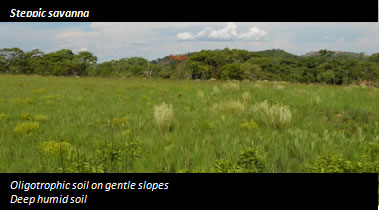 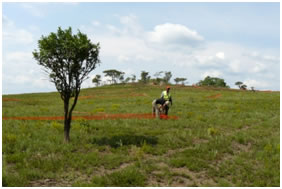 Site preparation and introduction of soils with high Cu-Co content

The site preparation at the future ecosystem (host) site should begin with the existing vegetation clearance and the excavation of local topsoil and subsoil. In order to reconstruct a 40x40m ecosystem, the vegetation should be removed on an 80x50m area (to facilitate the machine work) and the local soils excavated from a 40x40m area within. Then the specific subsoils and topsoils that will support copper plant communities are extracted from the original site and transported to fill the host site. 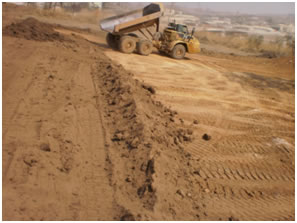 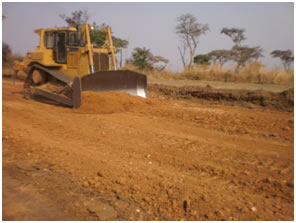 The vegetation mats or carpets can be extracted from the source areas at the original site with the use of a backhoe or loader bucket. The size of each mat will be approximately 80x200 cm.

The backhoe/loader places the mats directly on the flatbed trailer wooden pallets. The flatbed truck transports the vegetation from the original site to the host site.

The pallets are unloaded from the flatbed with a forklift and put down at the location corresponding to the reconstructed ecosystem layout. 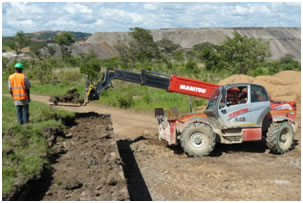 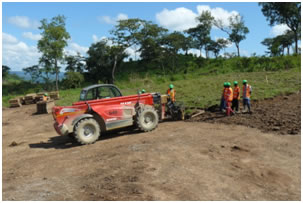 The forklift unloads the pallets at the host site

The pallets are gently tilted to allow the mat to slide from the pallet to the ground. Alternatively, the mats are directly placed on the ground with equipment or by hand. The mats are then arranged together like the different pieces of a puzzle.

Some soil was loaded and salvaged to be used to fill the empty spaces between the mats. 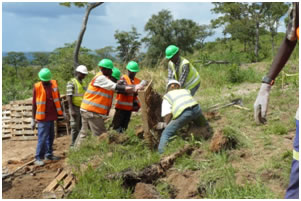 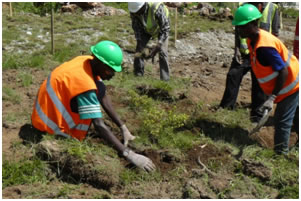 Some soil was loaded and used to fill the empty spaces between the mats. 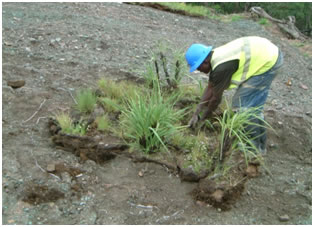 Filling the gap between the mats with the appropriate soil

The vegetation transplantation and reconstructed ecosystem is then complete. A routine monitoring program should be conducted each year.

Final view of the reconstructed ecosystem after 3 months (40x40m)

The following key indicators evaluate the success of the ecosystem reconstruction:

- An increased number of species that can be partly related to the appearance of weed species. Species richness is close to the one at the original site.
- Number of species of concern is lower than at the original site. 10 species of concern are missing. These missing species are the ones with deeper rooting system for which transplantation is known to damage the roots.
- Main observation made is certainly the increase of grasses, demonstrated by a higher cover and higher vegetation height than the reference ecosystem. This increase of biomass should be closely monitored in next monitoring. An explanation could be the lower competition created by the reconstruction in a context of low mineralization of the soil or a wetter year. Soil samples have been taken to try to understand this phenomenon.

The objective of this strategy is to conserve plant species and communities by the use of the topsoil (first few centimeters) from copper-cobalt clearings as a source of propagules (seeds and buds bank). The topsoil is transferred from a site to be mined to a host site to be directly placed or stored.

Two technics are possible: the direct or the indirect transfer. The direct return of topsoil to the host areas is encouraged, with a minimum delay between soil stripping and spreading to protect the physical and chemical properties and biological processes. The topsoil layer should be managed appropriately in the host area to avoid burial of seeds. The need to properly segregate topsoil and subsoil is vital.
Small scale and larger scale trials can be used with routine monitoring for long-term viability.

In this example a small scale experiment is initiated to test the efficiency of restoration methods based on the use of topsoil as a complementary method to an ecosystem reconstruction. 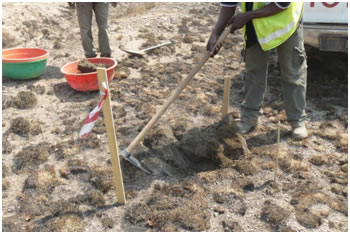 Topsoil excavated during the dry season on the site to be mined. Depth: 20 cm 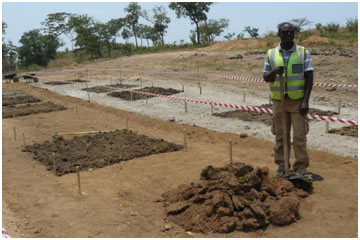 Spreading on the host site where a layer of subsoil was established. Height: 5 cm 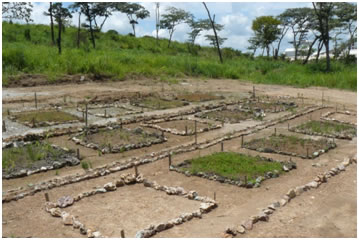 Small test plots present a positive evolution for species richness and cover of dominant species. Bare soil has strongly decreased, showing that after one year, a important cover of Cu-Co plants can develop from topsoil (if not invaded by weeds).

In this example a large scale experiment is initiated to test the efficiency of restoration methods based on the hauling and direct placement of topsoil to a prepared location. 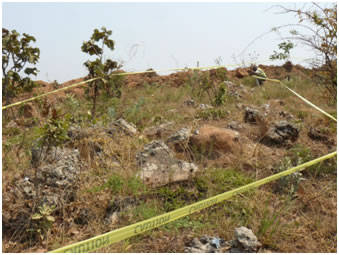 Identification of plant communities for which topsoil will be transferred 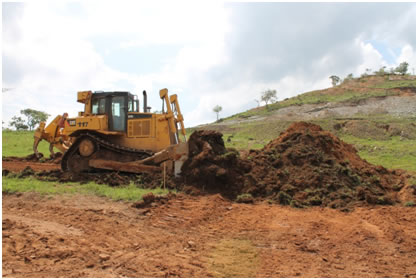 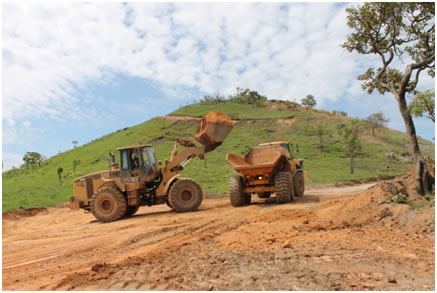 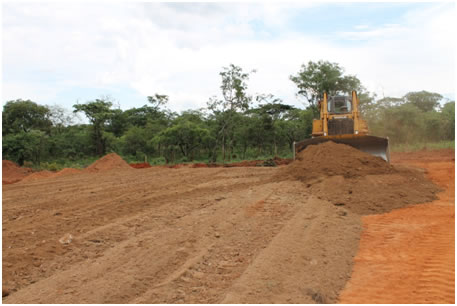 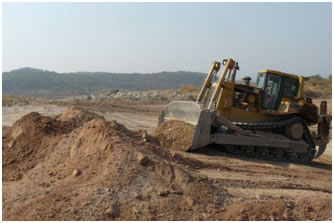 Transport and spreading of topsoil

Results are encouraging for species richness and number of species of concern. Percentage of bare soil is still important but may evolve rapidly as observed for other small test plots.

Translocation is the displacement of a population from its native habitat towards another area where ecological conditions are favorable to the development of the species.

The following actions can be achieved to rescue specific copper plant species: